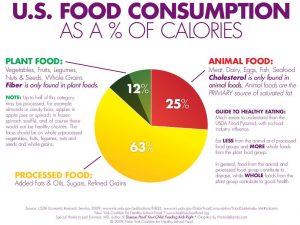 Wow! The initial response to our announcement about our 21-Day Detox Challenge has been fantastic!

I know many of you may not be able to join the info night on Thursday May 26th @ 7pm, but we will video and post it live.

In the meantime, I want you to ask yourself , Is Your Diet Making You Sick?

Would you call your diet extreme?
Are you lost when it comes to what to eat?

But if you eat the typical American diet, commonly called S.A.D. (Standard American Diet), you are eating an extreme diet in terms of the impact that it has on your health. Since this diet is so normal in American society, it can be very difficult to see it as out of the ordinary at all. After all, it’s just what we eat, right?

Yes, it is, but the ordinary is making us sick.

What you eat impacts your health in profound ways. After all, your body can only draw from what you feed it. If you feed it optimally, it will function optimally. But if you feed it poorly, it has no choice but to function poorly. A poorly functioning body is a body that is unhealthy and sick.

And it is no longer just Americans who are affected by this diet. As Western influence permeates other parts of the world, it takes our diet with it. And as it does, once robustly healthy populations now experience the same sickness that Americans are known for. In fact, the farther these cultures move from their traditional diets toward the Standard American Diet, the sicker they become.

Dr. John McDougall, author of The McDougall Plan, experienced this firsthand when he started practicing medicine in Hawaii. He noticed that the first and second generation Asian Americans were slim and healthy and were rarely afflicted with the typical Western diseases that plague our country. However, once these people adopted American eating habits, they began suffering from the chronic ailments that are so commonplace, such as diabetes, heart disease and obesity. The third and fourth generations were the ones getting sick!

The Standard American Diet is typically characterized by the following:
*High in unhealthy fats: trans, hydrogenated
*Low in fiber
*High in processed foods and refined flours
*High in refined sugars
*Low in complex carbohydrates
*Low in plant-based foods
Practically, this works out in your diet in the form of cereals, pastas, conventional meat, packaged and processed foods, dessert foods such as cakes and cookies, and fried foods and dairy foods. The reason this is called “standard” is because it is simply what nearly everyone eats. In fact if you do not eat this way, you are probably called a ‘health nut!’

What are the consequences of eating the typical American diet?

You may be surprised to learn what the effects of eating a S.A.D. diet are, because they are the very conditions that we have learned to associate with ‘normal’ aging. These include heart disease, diabetes, cancer, obesity, high blood pressure, brain-fog, headaches, low energy, bloating and gas, constipation, diarrhea and even dementia and Alzheimer’s Disease.

If you are like many people, you may not have even considered that most of these conditions have a cause other than aging. Likewise, you may not realize that in many cases they have a cure and certainly can often be prevented.

The answer? Detoxing your body and feeding it what it needs for optimal health.

After years of feeding our body the toxic foods that is so typical in our culture, it is important to cleanse our system and decrease the inflammation and stress that we have placed it under. Of course, toxins don’t come just from the food that we eat. We breathe them in (through air pollution), and we rub them on our skin (through personal care products that contain harsh chemicals and additives).

The good news is that through detoxification, we can lighten the toxic load that our bodies are under. This is done naturally, without the use of medications which would further stress our bodies.

In the meantime, be sure to register for the 21-Day Detox Challenge. You can learn more and secure your spot HERE.

Our trainers are certified, experienced, & knowledgeable in guiding you to reach your fitness goals.

Our fitness center offers a number of diverse classes to help you train in equally as diverse ways.

Our fitness center has a number of incredible classes and amenities for our members, including massage!

Fitness is a balance of so many important things, and one of the most important components of a healthy lifestyle is nutrition.